On my usual morning stroll, accompanied with my more than 10 years old trusty Canon 20D, I witnessed something very few people ever have seen;  a Norwegian type deer, similar to the American white tailed deer, giving birth to twin kids. One ting is to come across such a happening, which last just a few seconds of the visible birth, and then being able to photograph the scene as it happens – is close to unreal I understand.

An incident that grabbed hold of my throbbing heart. As I walked along a small creek I discovered  a female deer walking slowly at the edge of the forest. The female appeared very nervous, constantly locking back at her tracks. I got the feeling that something was on her tail so I started to think about my camera which was in my small backpack. Before I had my camera ready I noticed that she had stopped and I could clearly see the front part of the first kid was half the way out. I was to slow making my camera ready! I soon realized that most of these animals usually have more than one kid annually. I carefully moved myself into a bush as I watched the mother give gentle care to her newborn. The distance to the birthplace was getting rather great, but I had an effective 480 mm lens i my backpack, so I switched to this lens. My problem was that I had not brought a tripod and I knew that I would have serious difficulty holding steady enough for a sharp image at this focal length. I set my camera to maximum ISO and shutter speed priority as high as possible and let the camera take care of the aperture. And then I waited – patiently as I watched the mother continued grooming her firstborn. This kid was on it’s feet in just a few minutes but was not able to stay up very long.

After about 30 minutes of waiting the mother deer laid down and then raised herself again several times. I was ready! Soon I saw a new kid was on it’s  way to be delivered. I let my camera run and caught this bullseye: 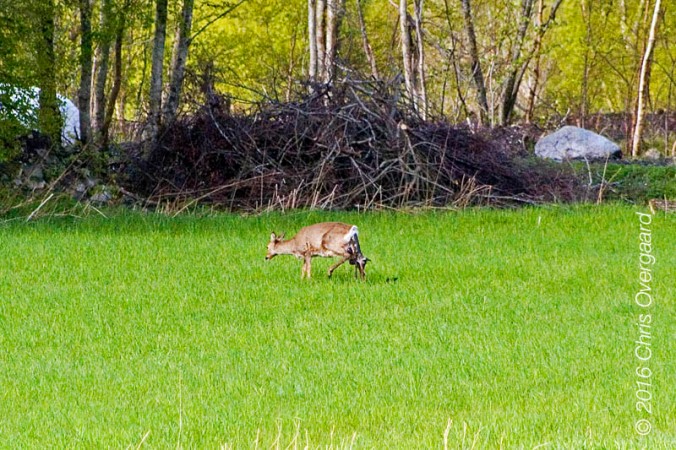 A Norwegian type white tailed deer calving. This is about 10 seconds into the visible part of the calving.

The delivery lasted not more than 25 – 30 seconds. I am sure you all understand that you really need to be at the right place at the right moment and not least; have a camera ready!  A large buck followed the happening at a considerable safe distance. 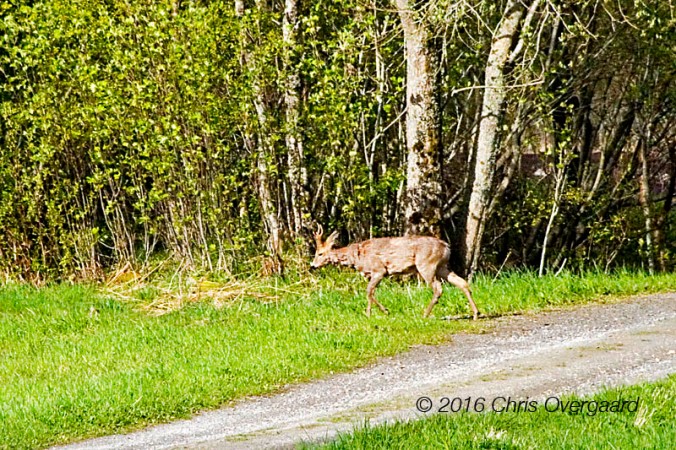 A Norwegian white tailed buck, possible the father of the two newborn kids.

During the second calving a crow became very aggressive. Shortly after she had delivered the second kid the female deer chased the bird away. I was very surprised that the crow never came back. The crow probably had some previous experience from similar situations. 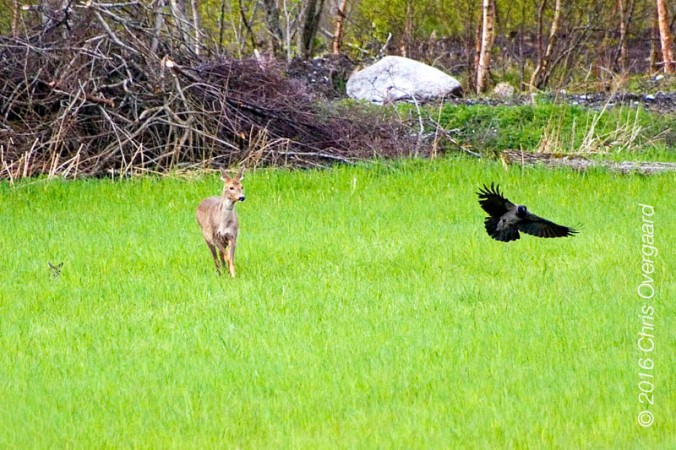 The mother deer chasing an aggressive crow away for her newborns. On the left you can see the firstborn head in the about 8 inch grass.

The calving took place around 8:30 AM. The same evening at about 20:00 PM I took another stroll to see if I could get a glimpse of the newborns. Bullseye again! Not only did I see both kids, but one of the kids came towards me with eye contact. I was really flabbergasted! The mother however stamped her feet and also made a soft grunt. This made the kid to quickly head for the bushes. 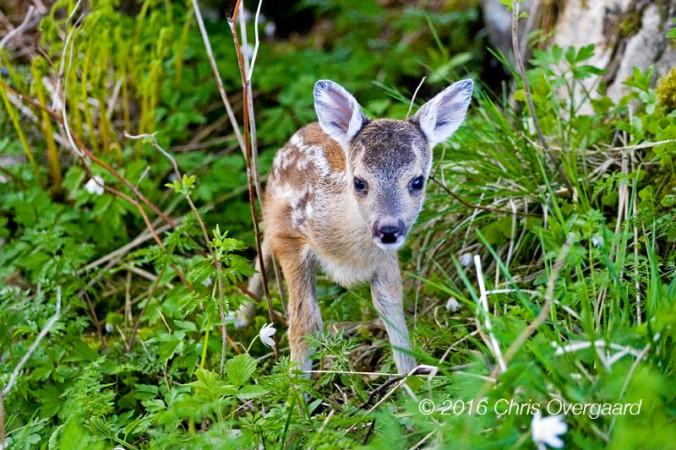 This is the newborn 12 hour old kid that made eye contact and came towards me.

Fall is here. Every day it gets a bit cooler. The weather is unstable, or should I rather say fairly stable – like horizontal rain! It’s mostly inside weather. But there is also some colorful moments. The foliage takes on it’s fall costumes.

A short trip out in the fields on this picturesque island I live on, confirms my above statement. The weather was a kinda chilly this morning. Clear crisp autumn air. Frost on the ground. A very good day for photographing whatever I would run across on my mini expedition. The following was my days catch. 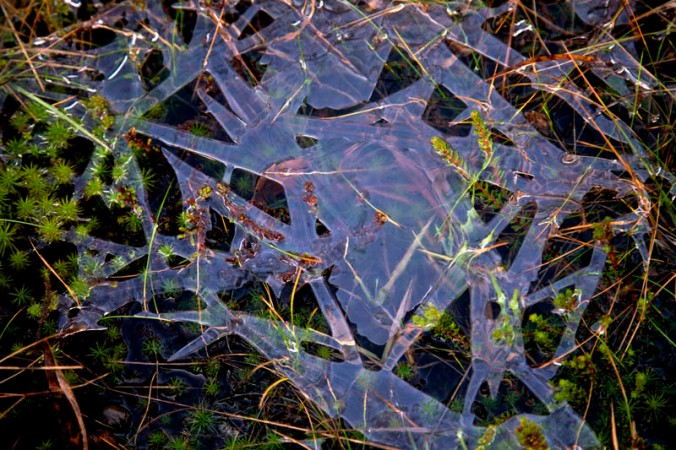 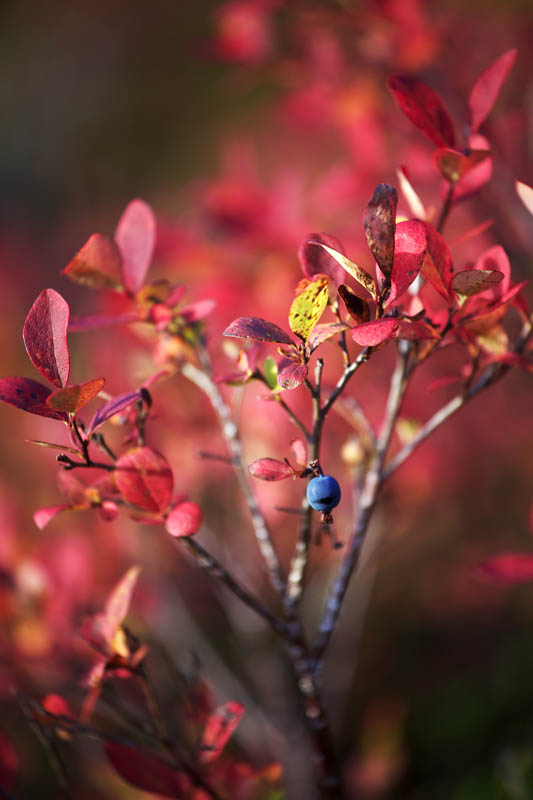 A single surviving blueberry on an autumn colored low bush 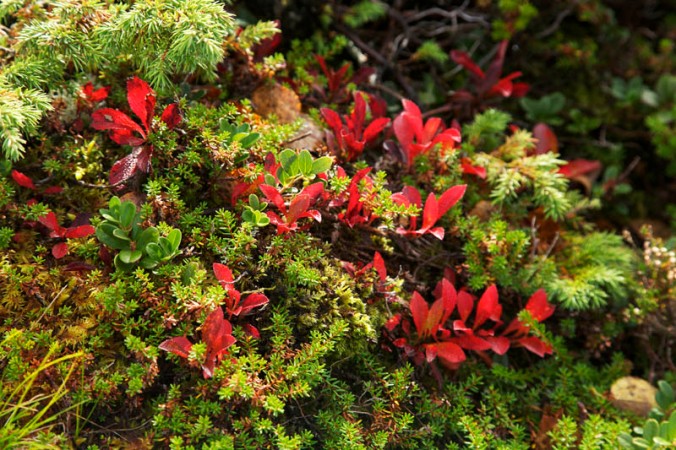 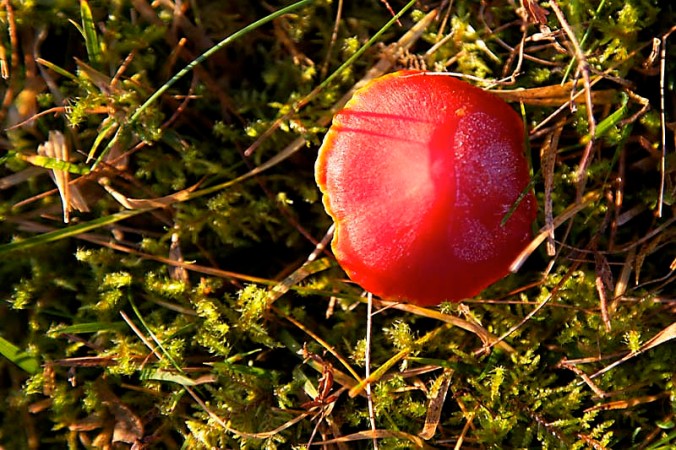 A  surviving red mushroom with frost still on its hat ended my tiny expedition.

As an avid photography lightstalker I recently ran across this interesting situation. It was a foggy morning I was on my way to a scheduled meting. As I was driving along in my car I approached one of the many fjords in this area. Suddenly the sun broke through the fog and created a very nice photographic moment. The only photo gear I had at hand was my old snappy, a Canon 20D with only a 18-55mm kit lens attached. Anyway, I quickly pulled my car over at a nearby resting area and got the camera ready for action. This is the result, converted to BW in Photoshop. I am sure an expert photoshop artist could do a lot more to this image. The moral of the story is; bring a camera wherever you go! “Life is like a box of chocolates, you never know what you’re gonna get”.